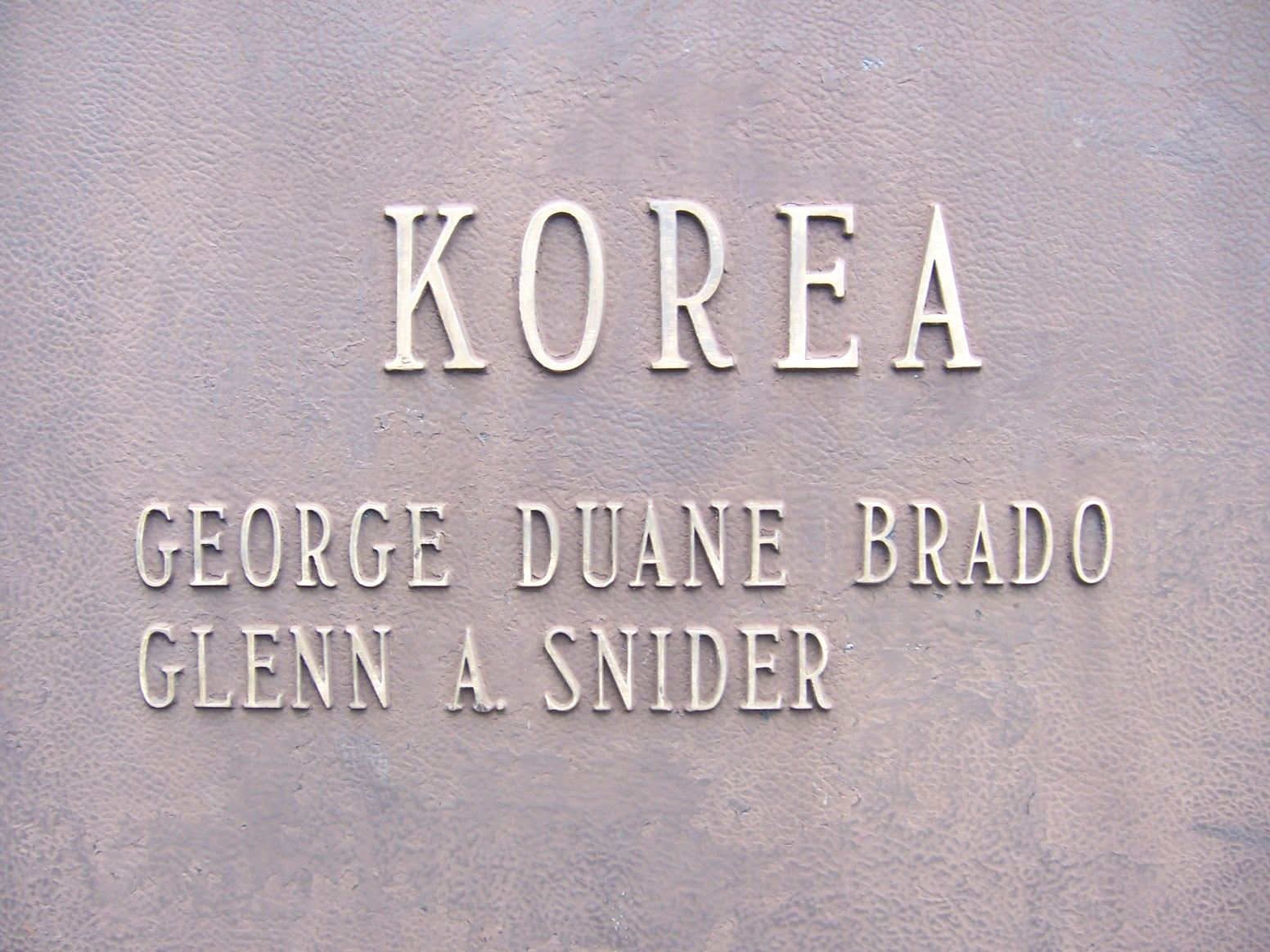 U.S. Army Sgt. George Duane Brado was killed in action while fighting in North Korea on July 21, 1953. His named is engraved on the Korean War plaque at Causland Memorial Park.

He was born in Anacortes on Dec. 3, 1929 to City Councilman George Brado and wife Zena. He graduated from Anacortes High School, then worked at the Coos Bay Pulp Mill before entering the Army in August 1952. He married Marilyn Webster on Jan. 24, 1953 in Sedro-Woolley, and went to Korea less than a month later. He served with the 15th Infantry Regiment, 3rd Division, 8th Army, stationed on the central front in North Korea. He was killed on July 21, 1953, six days before a truce ended the war.

Master Sgt. Glenn Arthur Snider, who gave his life in service to his country in Korea on March 31, 1951, has his name engraved on the Korea plaque at Causland Memorial Park, as well as on the National Korean War Veteran Memorial in Washington, D.C.

M/Sgt. Snider was born in Anacortes on June 22, 1922 to Fire Chief Leslie Snider and his wife Katherine. M/Sgt. Snider graduated with the AHS class of 1940, and he and Elizabeth Askell were married in Seattle on June 17, 1943. They lived in Seattle and had two sons, one of them named Jerry (Snider) Ball. He enlisted in World War II on Feb. 27, 1946, with three years at the University of Washington under his belt. He was in the Enlisted Reserve Corps and back at the UW when he was recalled to active duty in 1950, according to the Anacortes American. He served as a Master Sergeant in the U.S. Army, C Company, 2nd Engineer Combat Battalion (Corps of Engineers). His unit was building roads in the mountains near Toki-hon when a Chinese offensive forced them to evacuate.

He was captured Nov. 28, 1950 near Kunu-ri, North Korea. He died while a prisoner of war on March 31, 1951, but it was several years before his family knew for sure. He was listed as a POW or dead in 1953, after he was not returned with a group of prisoners exchanged.