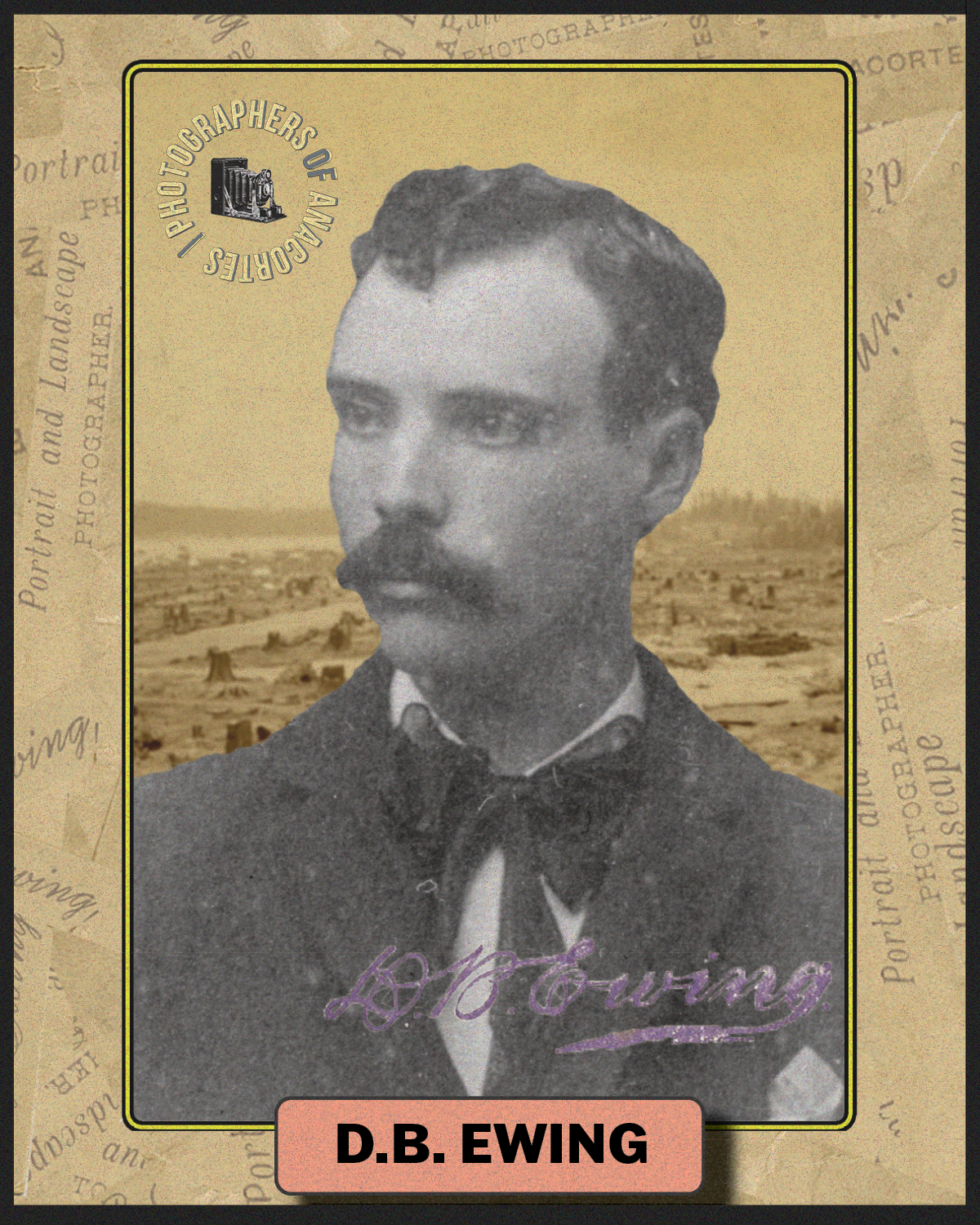 The only known photo of D.B. Ewing, taken for his wedding with Susan L. Nevin.

No photos of Booen are known to exist; perhaps these photographers were a little camera shy!

David Brown Ewing was born in Illinois in 1864 to a farming familly. By May 1889, the Washington Territorial Census shows him working as a photographer in Seattle. Later that year, he teamed up with James O. Booen in Anacortes; between them, they created most of the iconic photographs of the city's boom. They moved to La Conner in 1890; Ewing covered Fidalgo and Guemes, while Booen covered La Conner. The partnership ended in 1891 when Ewing opened a studio on P Avenue in Anacortes, billing himself as “The first established photographer in the city.”

In 1892 Ewing married Susan L. Nevin, Booen's sister-in-law. From 1893 to 1903, Ewing was based in Everett, but he a few working trips to Anacortes each year until 1897. Each time, a small ad in the Anacortes American announced the dates he would be available. On Sept. 8, 1898 the American reported that R. Schwarz had purchased the Ewing art studio and "will reopen it next week, prepared to take photographs." 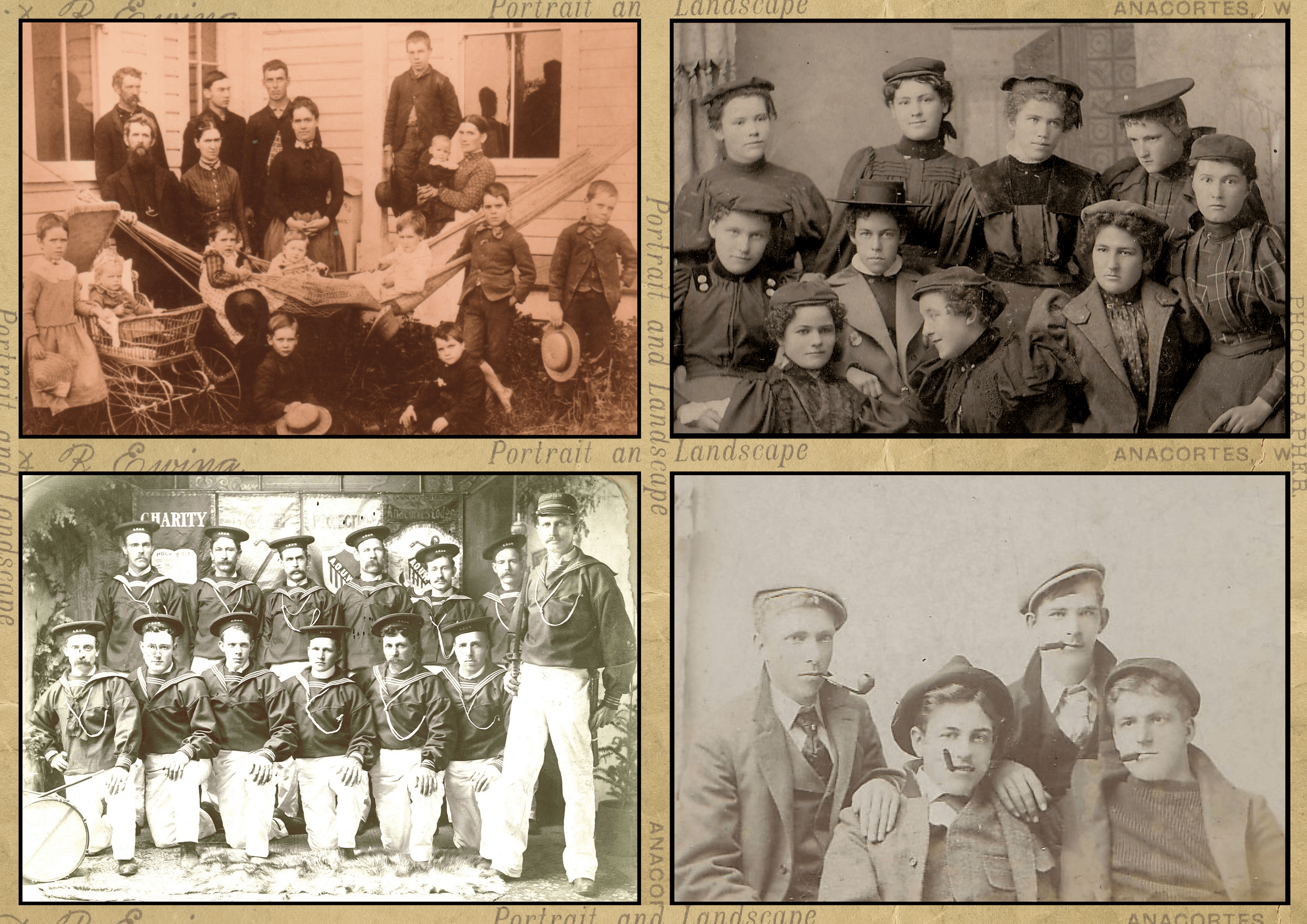 Ewing took many of the early settler's portraits. He was so popular with the people around town that they would continue to seek out his business after he moved to Everett in 1893. 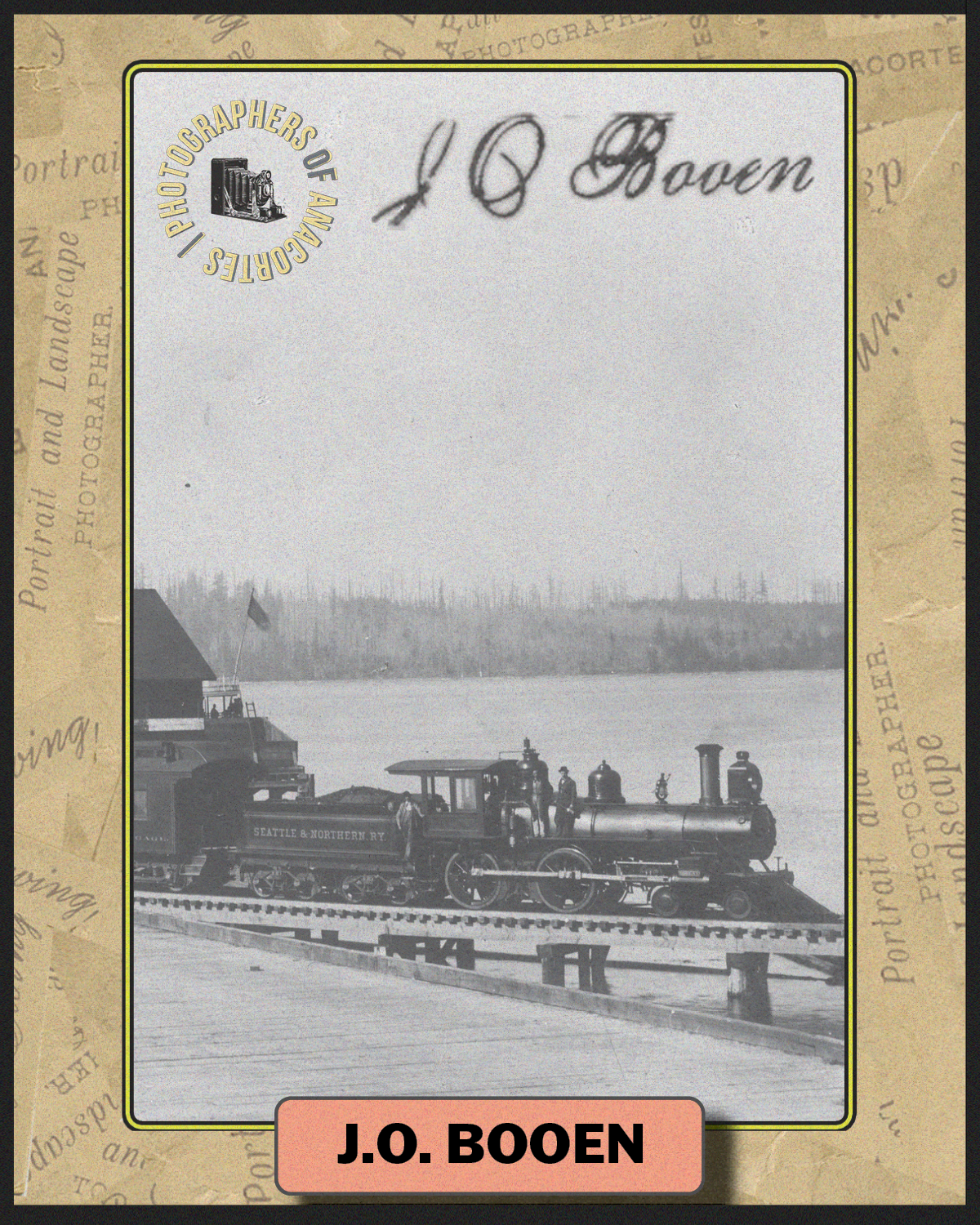 Born in 1864 in Minnesota to a farming family, James O. Booen became an itinerant photographer, moving throughout the West before coming to Seattle in the mid-1880s. He served a wide range of remote Washington communities, working first for D.R. Judkins, then for Frank LaRoche, whose roving equipment he purchased.

On Oct. 26, 1889, he set up a canvas tent in Anacortes to "take all kinds of photographs," then teamed up with David Ewing when the boom took hold. In the summer of 1890 they moved their studio to La Conner. Booen handled La Conner trade, and Ewing handled Fidalgo and Guemes. 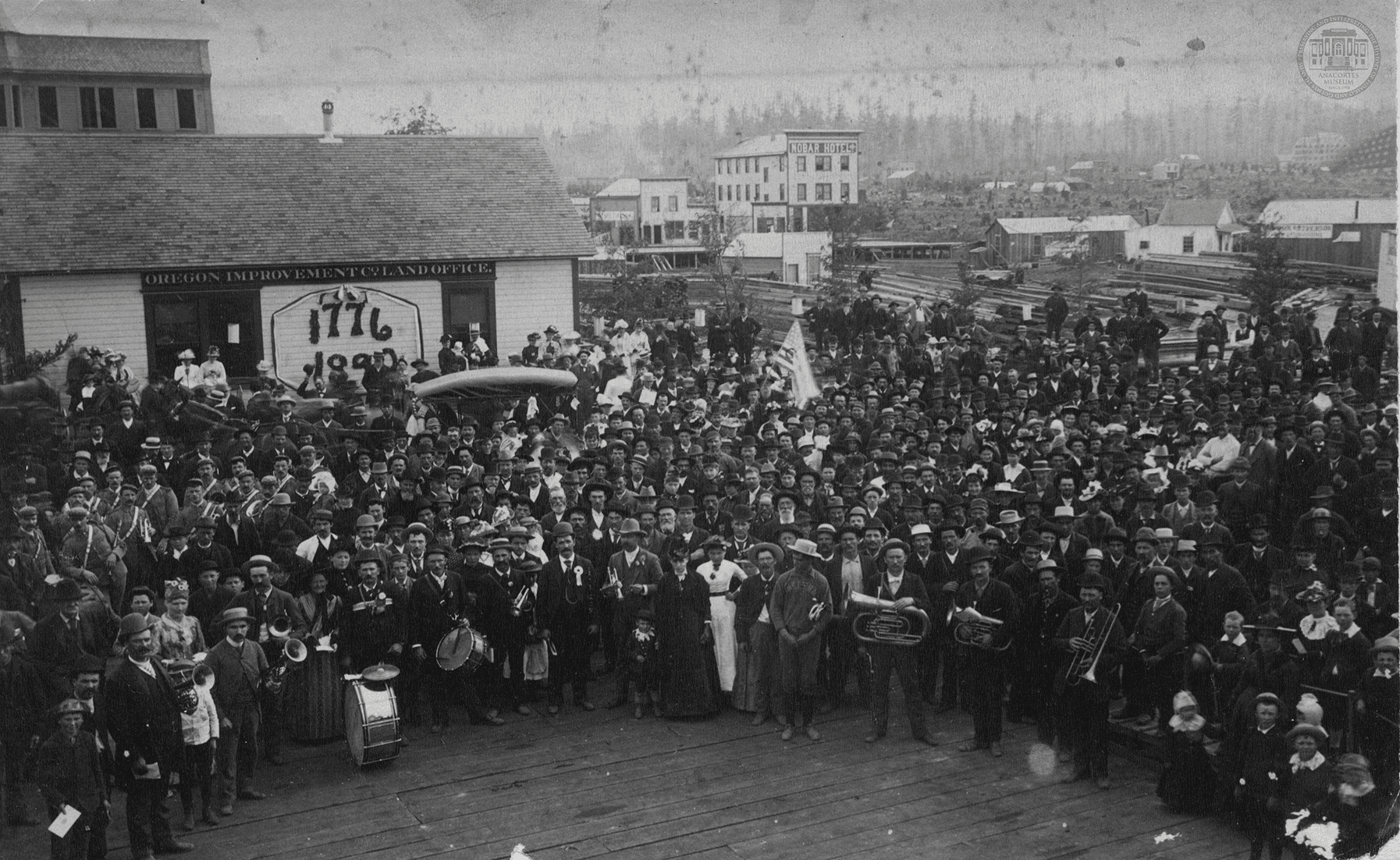 In 1891 Booen led a photo expedition up Mt. Baker with his sister-in-law Susan L. Nevin, who later married Ewing. In 1895-97 he lived and worked in Chilliwack, B.C., Canada. Booen, his wife Cina and family moved to Minnesota, then settled in Miles City, Montana, where he operated a photo studio. He died there June 28, 1934.

The Flash of a Camera - The Boom of a Settlement

Much of Ewing and Booen's most important work was done photographing the "boom-period" of Anacortes. Their record gives us a clear picture of one of the most important periods in Anacortes' history. 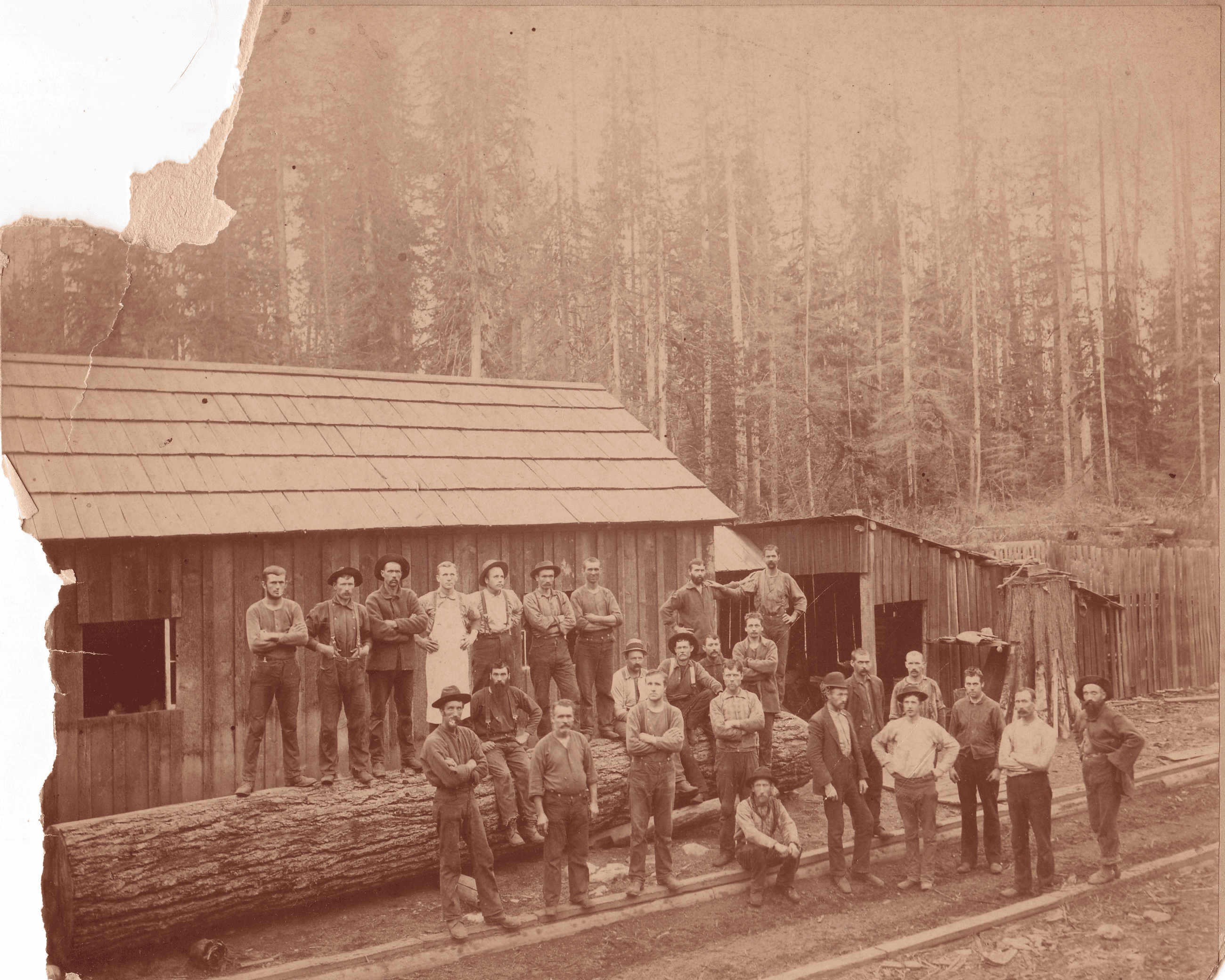 Ewing and Booen worked during Anacortes' "boom period" in the early 1890s. 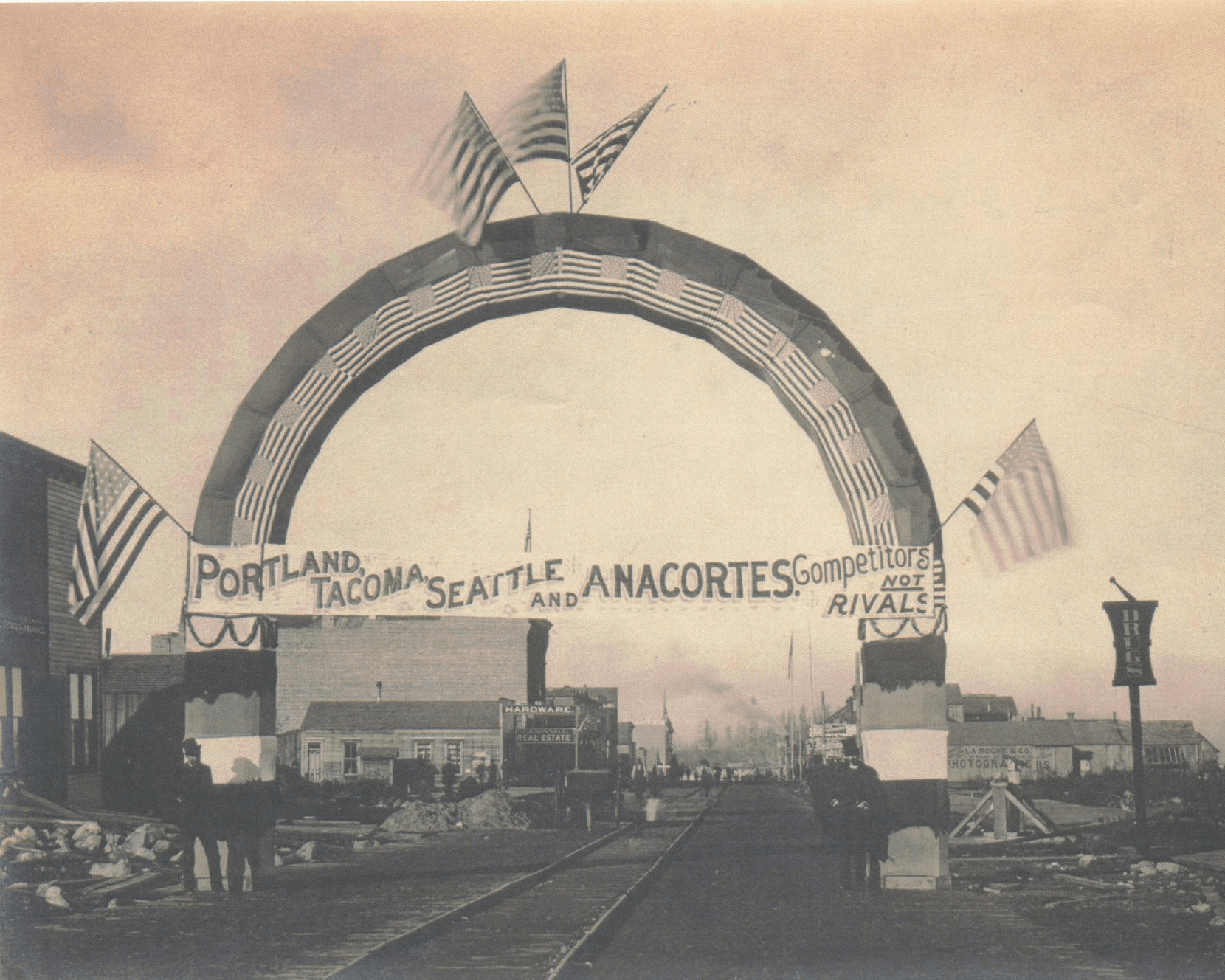 The boom was ignited by plans to make Anacortes the terminus for the Great Northern Railway. Speculators and hopeful citizens referred to Anacortes as "The New York of the West." 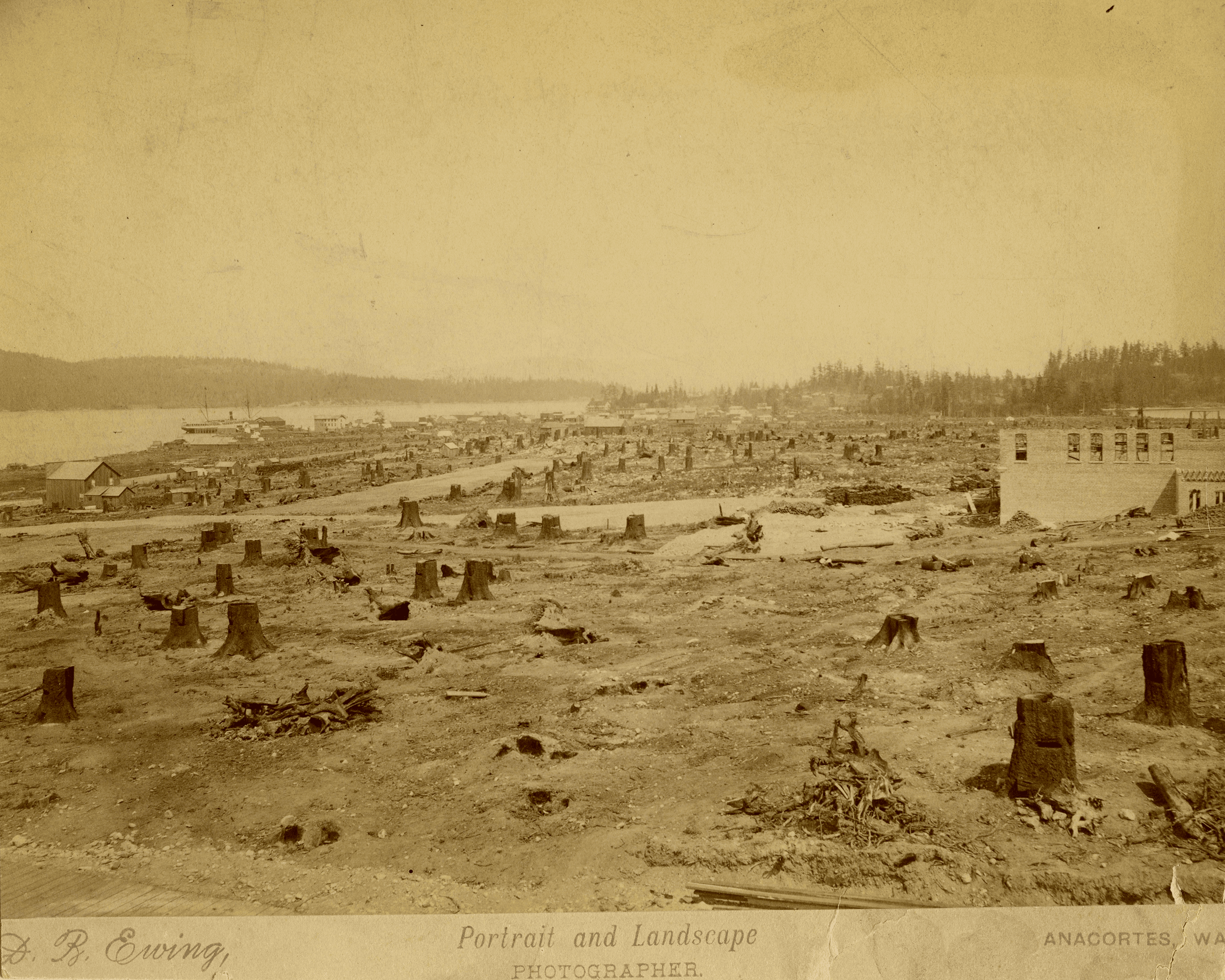 Large swaths of town were clear cut and developed as an influx of new residents piled in to Anacortes. The photo above shows a recently developed patch of what is now "Old Town."

An excited populous looked forward to a prosperous life that the railroad would bring to town. Pictured above is P Avenue, known today as Commercial. 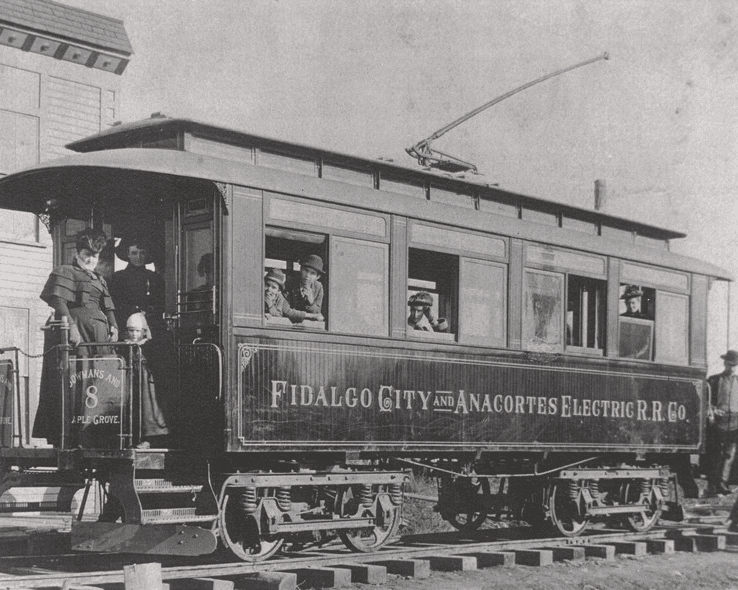 Hopeful businessmen and investors decked out Anacortes with some of the most modern amenities, one of those being an electric railway that led from Commercial Avenue out towards Dewey. The four rail cars built for the railway were the first ever electric rail cars in the Northwest. 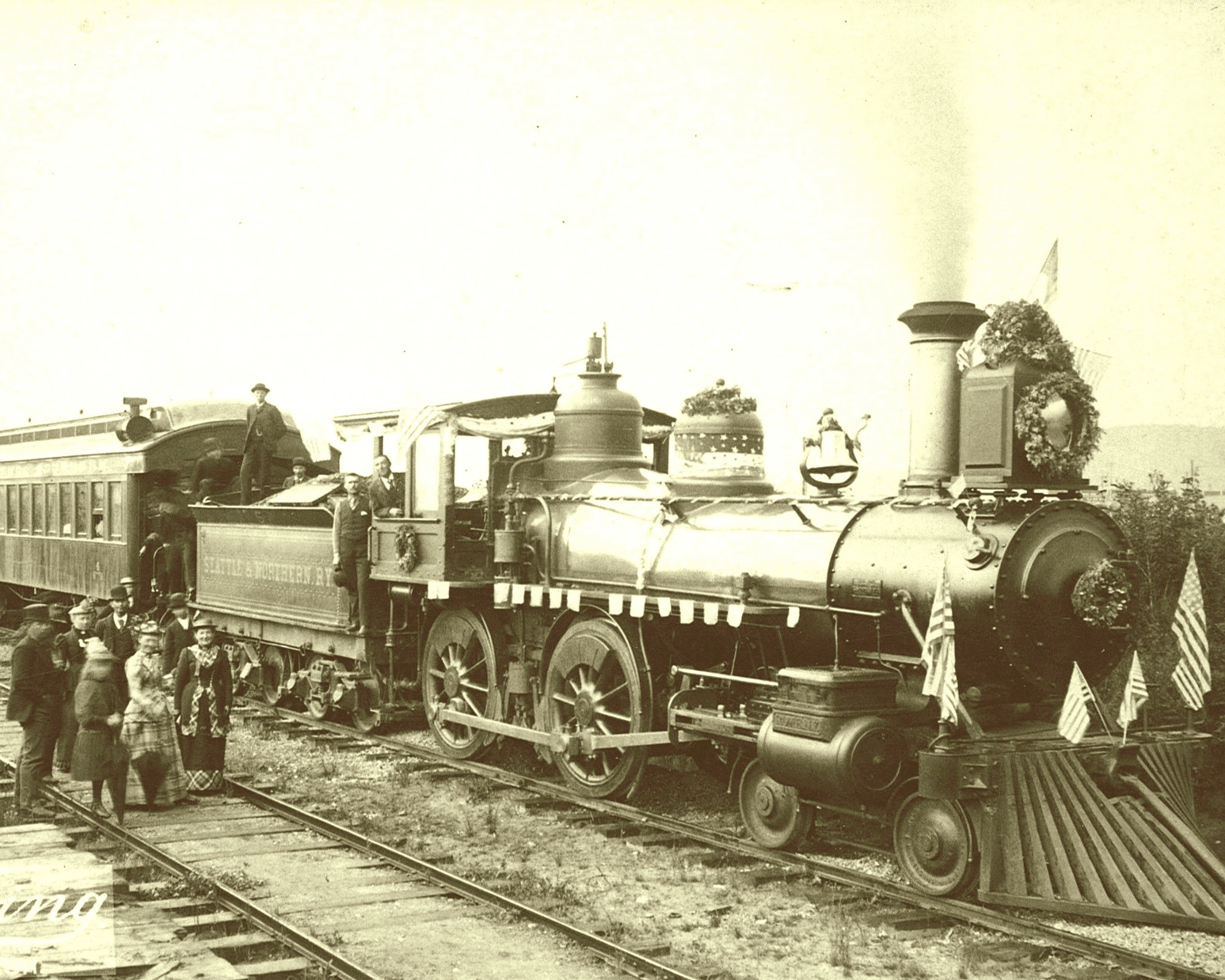