Setting Sail: The First Trip on the Sidney-Anacortes Ferry 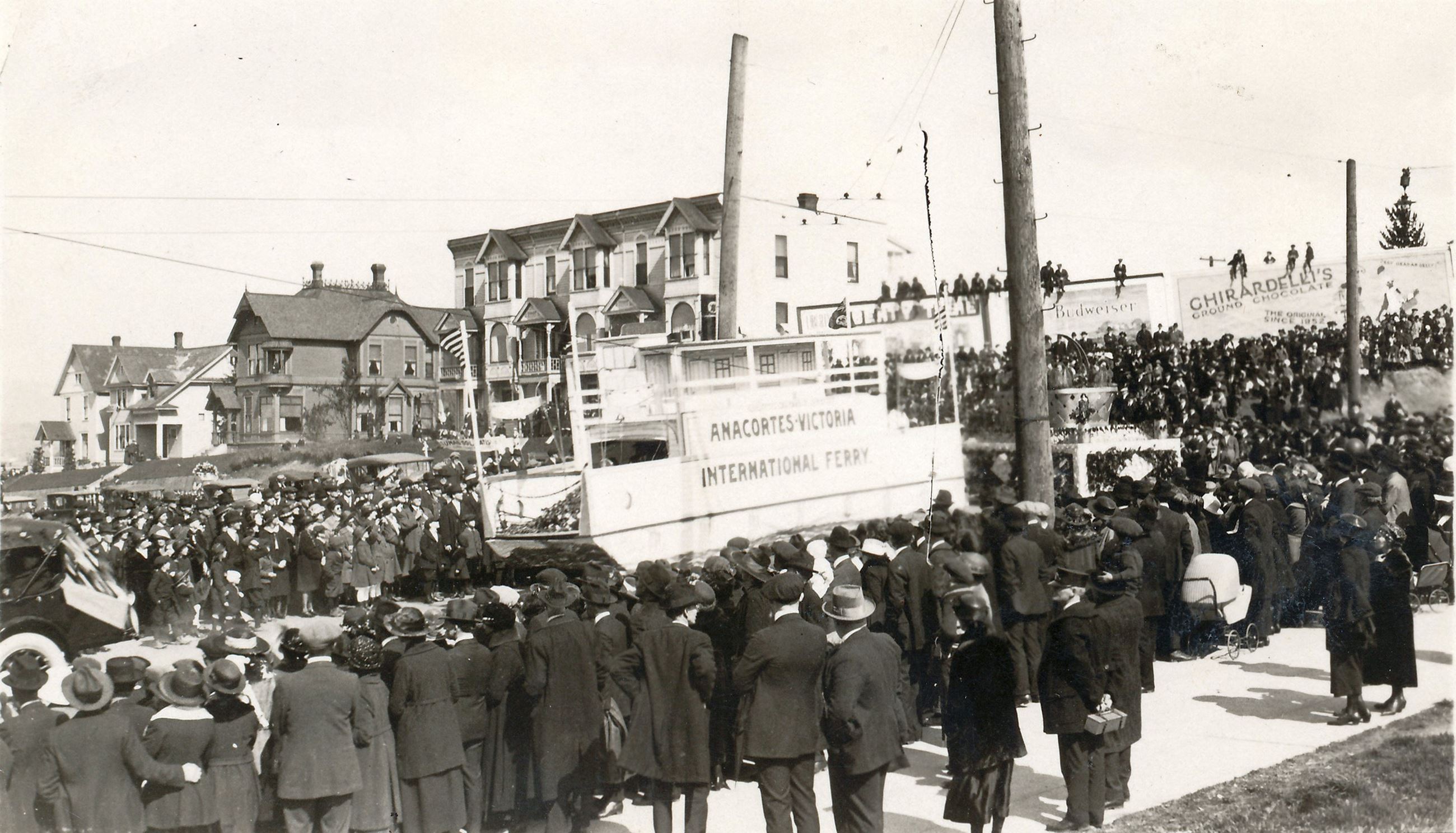 On April 26th, 1922, our town’s history was changed forever when the MV GLEANER and MV HARVESTER KING took to the seas from Ocean Wharf on Q Avenue; the two converted steamers, together carrying a load of 23 automobiles and 175 eager passengers, voyaged first through the San Juan Islands, before landing at their destination of Sidney, B.C. There the two different countries celebrated their new maritime connection; Canadians sang along to America The Beautiful and the Americans in turn sang God Save The King. This was the beginning of the Sidney-Anacortes auto ferry, an institution and friendship that has lasted a century. In that time it has come to define much of Anacortes’ tourist economy and identity, placing Anacortes directly on the international highway and giving it the title of the “Gateway to the San Juans.”

“After fighting for many years for a place on a principal highway, Anacortes has secured an important position on an international road and waterway that will give her a big place in the eyes of thousands of tourists.”

The inaugural trip was the result of years of planning in Anacortes and Sidney, both fighting to establish their smaller, less assuming communities as must see spots for those traveling to the Pacific Northwest. Access to Vancouver Island was at this point severely limited. Boats in the Mosquito Fleet that had long served the ferrying needs of the area were small, uncomfortable, and ran mainly on request. More importantly they often could not carry automobiles, much less multiple of them at a time. As the automobile emerged as America’s go to form of transportation, the Mosquito Fleet seemed destined for the boneyard. There were auto ferries that operated out of Vancouver and Port Angeles, but their accommodations were less than stellar. A large car could not be taken to the island at all, and a medium sized car would have to have its top and windshield removed, or its tires deflated in order to fit – all to the tune of $42 for a round trip with a car driver and four passengers, a small fortune to pay back then. Large scale visitation and tourism of the San Juans and Vancouver Island was not really an option, the bodies of water that separated the islands were simply too much of an obstacle.

Residents of both Vancouver Island and Anacortes knew that if they could just give people the means and reason to visit their communities they would be hooked. The beauty was there, as was the adventure, but that didn’t mean anything if you couldn’t take your car to it. Few understood this better than Captain Harry Crosby, who would be the first owner of the Anacortes-Sidney ferry system. Crosby was a young entrepreneur that saw great promise in Anacortes as a ferry capital in the Northwest, and an Anacortes-Sidney route was the perfect start. The route was simple but featured beautiful views of the San Juan Islands, making it ideal not only for practical trips across the water but for pleasure cruises as well. Anacortes and Sidney both were quick to jump on board with the idea, as was the larger city of Victoria, B.C., which, being a quick half hour drive south of Sidney, was to be the main destination for most international travelers.

An international team was assembled to make the project a reality which included organizations both governmental and maritime from each of the three communities. Captains Crosby and William H. Kasch raised money to buy the first ferry that would be put on the route, a refurbished kelp dredger called the HARVESTER. George I. Warren of the Victoria and Islands Publicity Bureau followed up by buying the popular excursion steamer GLEANER that ran from Mt. Vernon to Seattle on the Skagit River. While neither was an ideal candidate for the new ferry route, both were small and not originally built to host cars, the two would work well as a test of the Anacortes-Sidney concept. 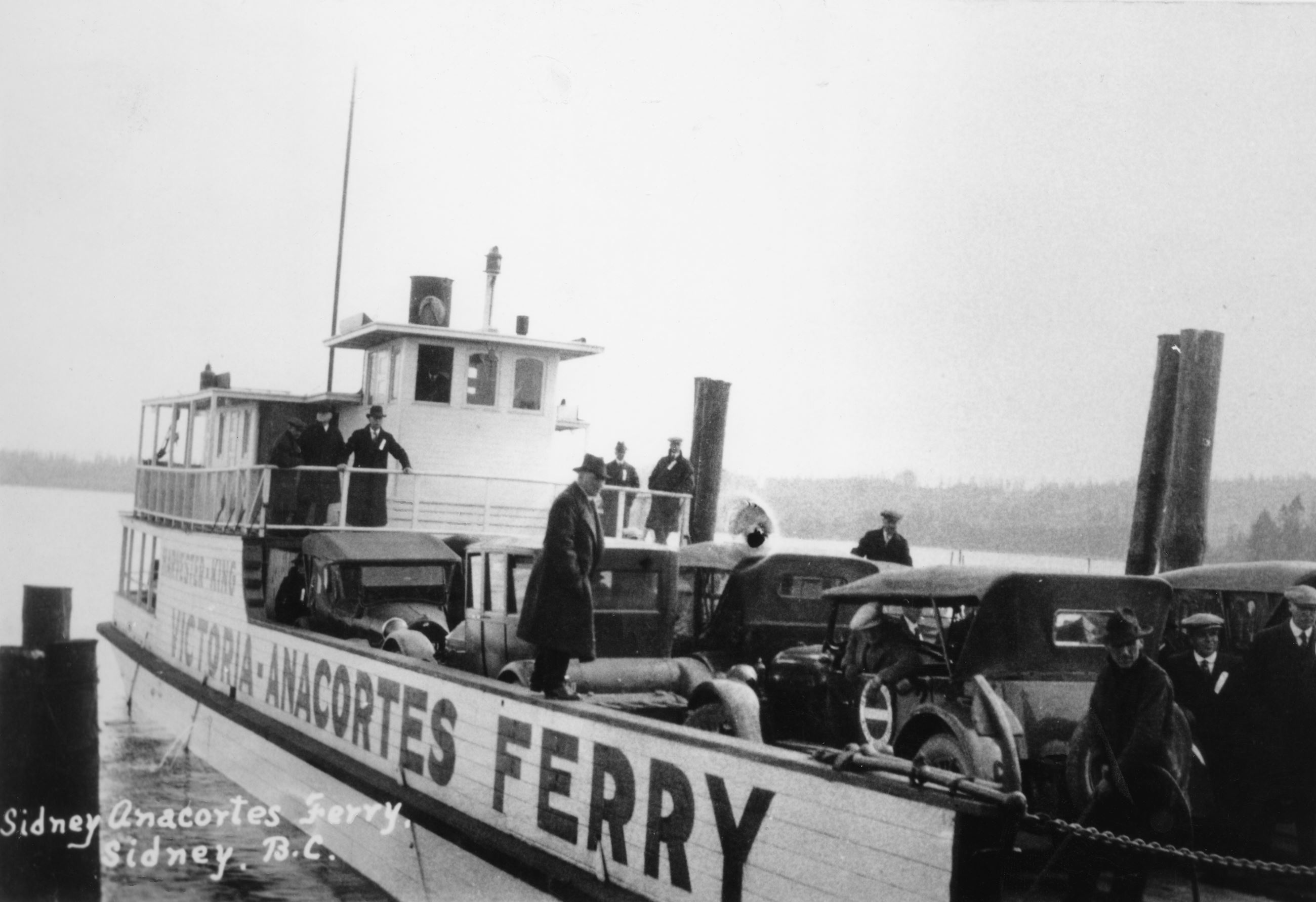 The MV HARVESTER KING, initially simply the HARVESTER, was a rebuilt kelp dredge and one of the founding two vessels on the Sidney – Anacortes ferry route. Unlike its close friend the GLEANER, the HARVESTER KING was never used as a passenger vessel prior to its service as an Auto-Ferry. It was used for various odd jobs, such as in 1918 when it was instrumental in providing a flooded Skagit Valley with supplies from Seattle during a year of particularly disastrous rainfall.

Captains Crosby and W. H. Kasch purchased the HARVESTER KING from the Port Stanley Kelp Reduction Company. It was outfitted to fit 8 cars and 46 people on it and because of this did not have a very long life as a passenger vessel. From the very beginning Crosby had hoped to upgrade the HARVESTER KING to something larger and faster. The HARVESTER KING ended its service in the winter of 1922 and was bought by Captain H.H. Mcdonald of the Skagit Navigation Company who placed it on the Mt Vernon - Seattle excursion route in 1924. On this route its more antiquated features were found really quite charming. 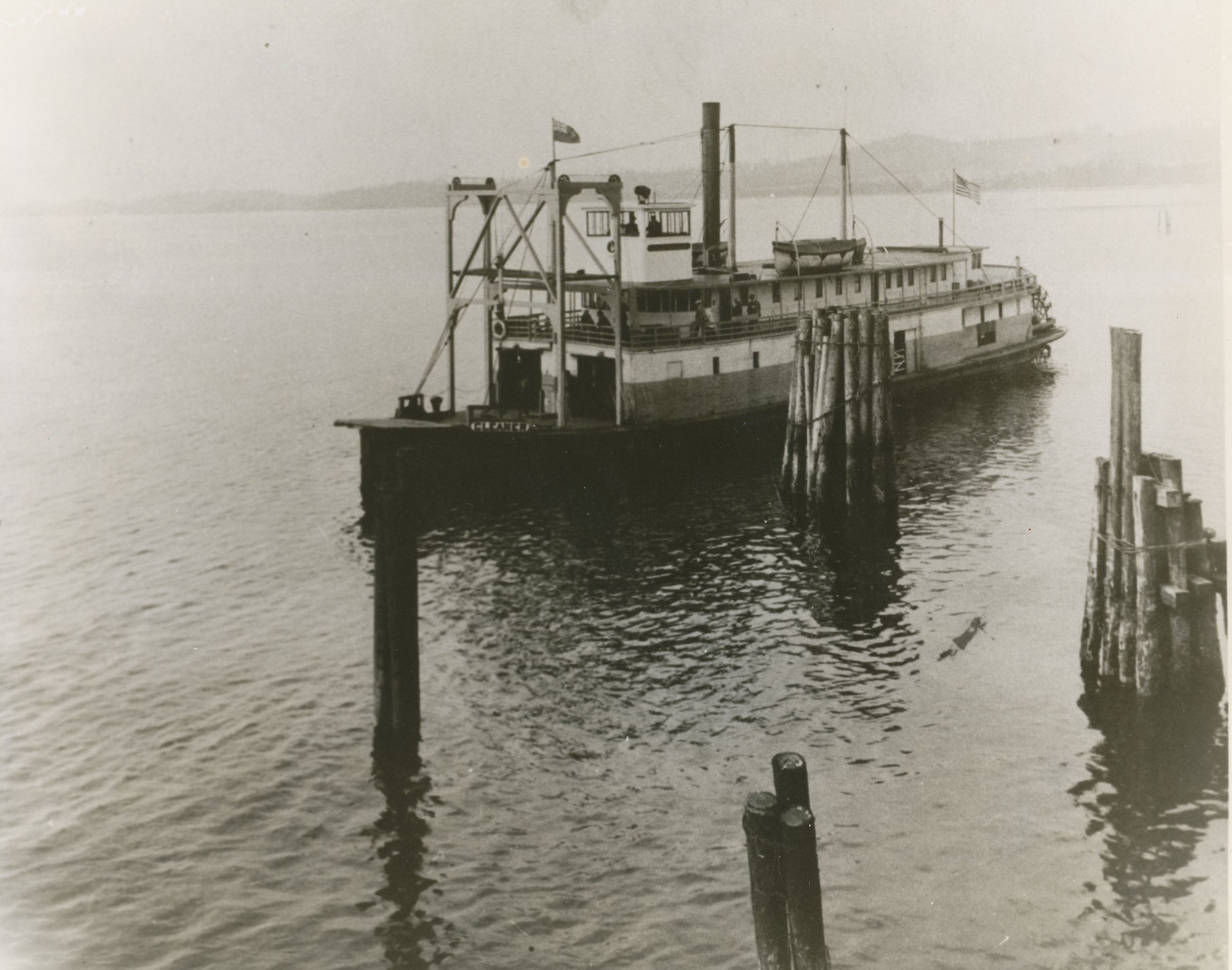 Built in Stanwood in the summer of 1907, the steamer GLEANER originally worked out of Mount Vernon as an excursion vessel for the Skagit Navigation Company. Trips on the GLEANER from Mount Vernon to Seattle or Rosario Beach were very popular, the decks could host several hundred onboard at once and trips often included dancing to a live onboard band.

When the GLEANER was purchased for the Sidney-Anacortes route, it was outfitted to carry 23 automobiles and 130 passengers. The GLEANER did not condense water for her boilers and had to fill her tanks each trip. When the boat was purchased for auto-ferry usage, a pipe had to be run from the water main on Commercial to the dock at Q Avenue. This pipe would connect to the GLEANER’s boilers and fill her up at the start of each trip, an operation that did not always work as intended. On the GLEANER’s first outing to Sidney, in what was described as a series of “vexatious delays,” the GLEANER had trouble securing water through the newly installed pipes (the dock itself was only completed six days prior to this first outing).

The GLEANER was bought back by Captain McDonald in the October of 1922 and returned to her Skagit River route – finishing her years of service carrying Carnation cans of milk. In 1940 she was put out of commission forever by a snag that punched a hole in the steamer – putting her to rest after a long and unique career.

The next thing the team had to figure out was where to place the first dock, and the Anacortes city council was happy to arrange this. The council contracted the construction of a ferry slip at the foot of Q Avenue. This slip had some unique features: first was the border and customs office, as Anacortes was technically a border town now, the second was a long water pipe that ran all the way from a water main on Commercial Avenue. The reason for the pipe was that the GLEANER was not able to condense water for her boilers and had to be filled up before each trip.

“Every member of the council agreed that it was one of the biggest things the city ever faced.”

On the day of the first outing, the boats had to leave a couple hours late because the GLEANER was having trouble securing water through the new pipe system. A massive party put together by B.C. at Victoria’s Empress Hotel had to be put on hold as the Canadians waited patiently for the late visitors. The weather wasn’t very good either, making for a less than ideal travel experience for the important day one guests and potential investors onboard. Still, this excursion was considered a great success and it was off to the races for Crosby and the ferries from there. The following Sunday the Sidney-Anacortes ferry would open to a very excited public at the price of $3 per car and $1 per passenger (around $50 and $17 respectively in today's money). The HARVESTER KING ran a roundtrip in the morning and the GLEANER ran another in the afternoon. Victorian alderman A.E. Todd of the Pacific Highway Association gave the opening remarks at the Empress Hotel celebration stating, “This visit is making the rosy dreams of the island's good roads enthusiasts come true.” 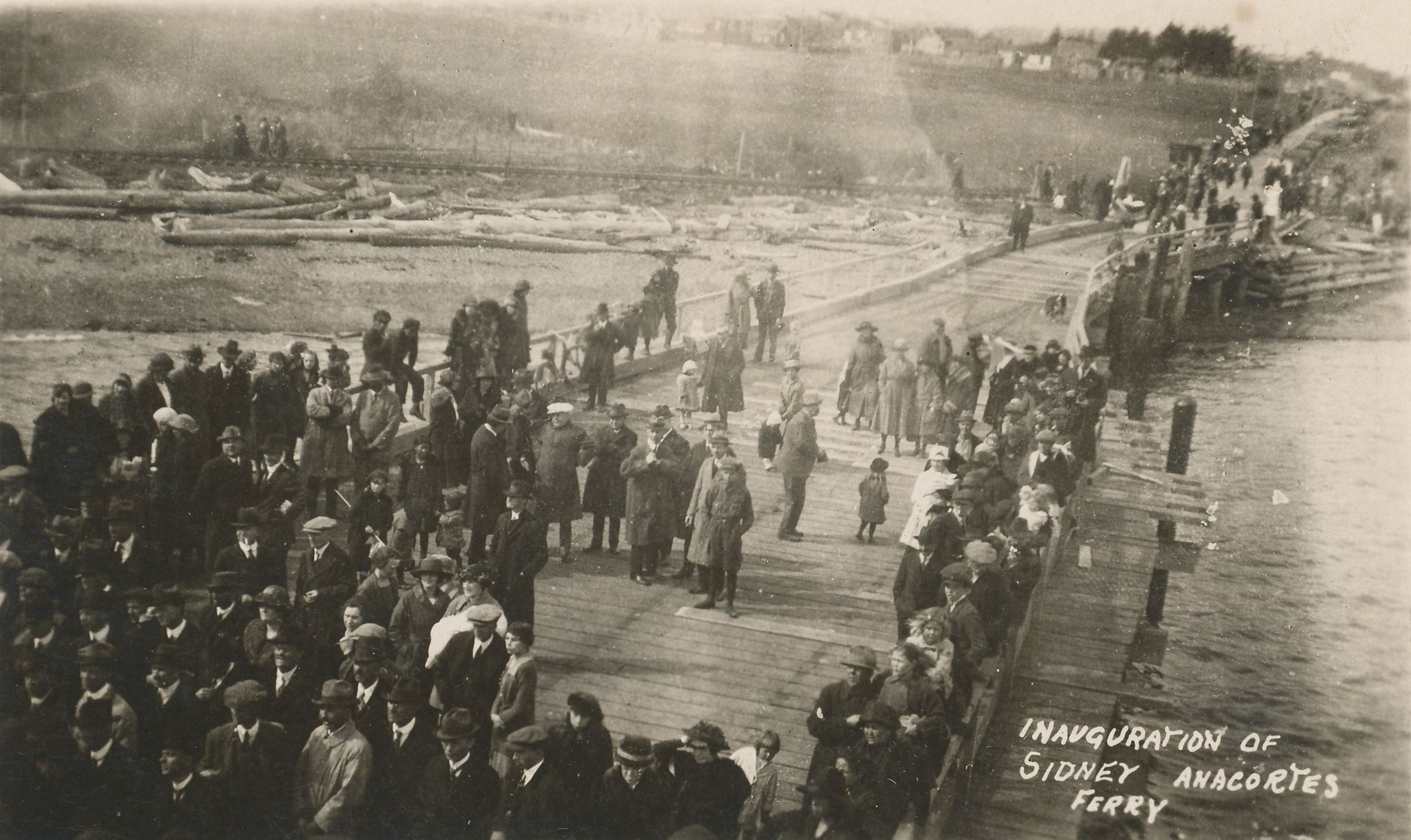 “Sidney was gaily decorated for the arrival of the boats, and practically the whole population of the town was on the dock to greet the visitors.”