The City of Anacortes wishes the slightly younger Anacortes Yacht Club “Happy 125th Birthday!” To honor the occasion, the city’s Maritime Heritage Center has unveiled an exhibit panel detailing highlights from the club’s history, including current activities like the Tulip Regatta, assisting with the youth national sailing races and Waterfront Festival boat rides. 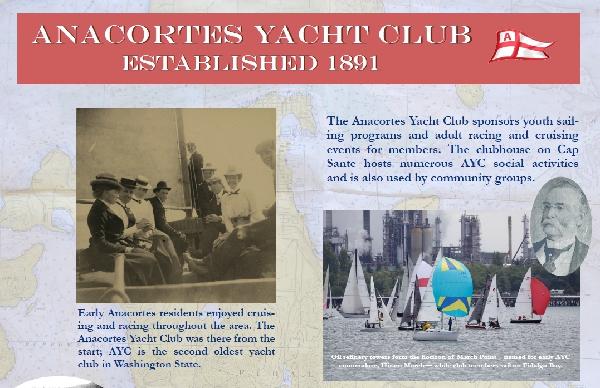 Early Anacortes residents enjoyed cruises and racing throughout the area. The Anacortes Yacht Club was there from the start; AYC is the second oldest yacht club in Washington State. According to AYC history:

“Amos Bowman, the founder of Anacortes, was a member of the Yacht Club's house Committee in 1892, and he generously offered the use of an acre of land on Hat Island and a house in town for Yacht Club purposes. Twenty-two yachts, four of which were from Anacortes, completed at the Queen's Regatta in Victoria in May, 1892. The Anacortes yachts, American and Ariel took 2nd and 3rd places. Unfortunately there was a casualty when Captain Anderson fell off the yacht Oddfellow and drowned.”

The first Anacortes Yacht Club building was located on the west side of the Cap Sante Marina from the mid-50s through the early 1990s. This building was barged from the nearby Morrison Mill, (site of Seafarers’ Memorial Park) where it had originally functioned as the mill’s office. More from the AYC website:

“One of the great highpoints for the Anacortes Yacht Club occurred in July, 1991, when the AYC celebrated its 100th anniversary by moving into its new accommodations at the north basin of Cap Sante Boat Haven. This facility was funded by share sales to club members. In 1992 adjacent property was purchased to accommodate the club's future growth.”

The yacht club display was a collaboration between Maritime Curator, Bret Lunsford, and AYC’s Vice Commodore, John Wilkinson. Other displays featuring Anacortes’ maritime community are in the works, including a spotlight on the Old Anacortes Rowing Society (OARS), as part of the “Explore Anacortes Waterfront History” exhibit now up at the Maritime Heritage Center, 703 R Avenue. Meanwhile, the “Anacortes at 125” exhibit is on display at the Anacortes Museum, 1305 8th Street.