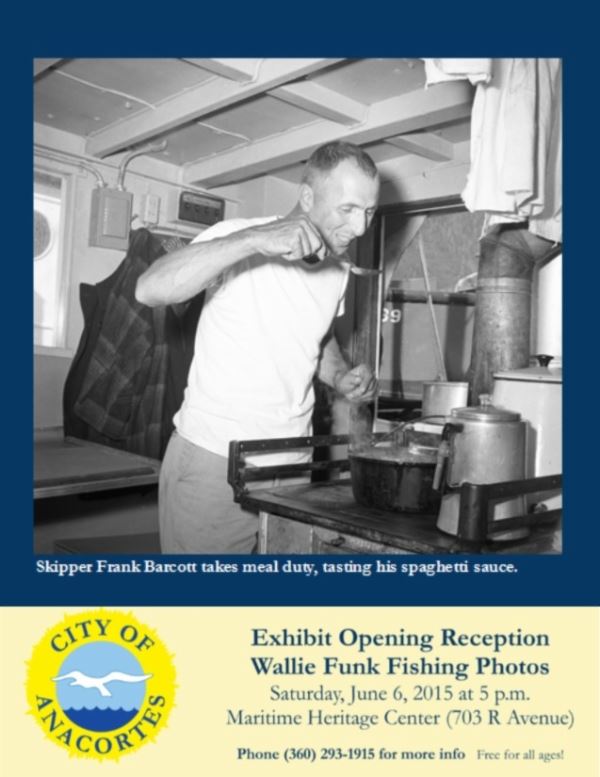 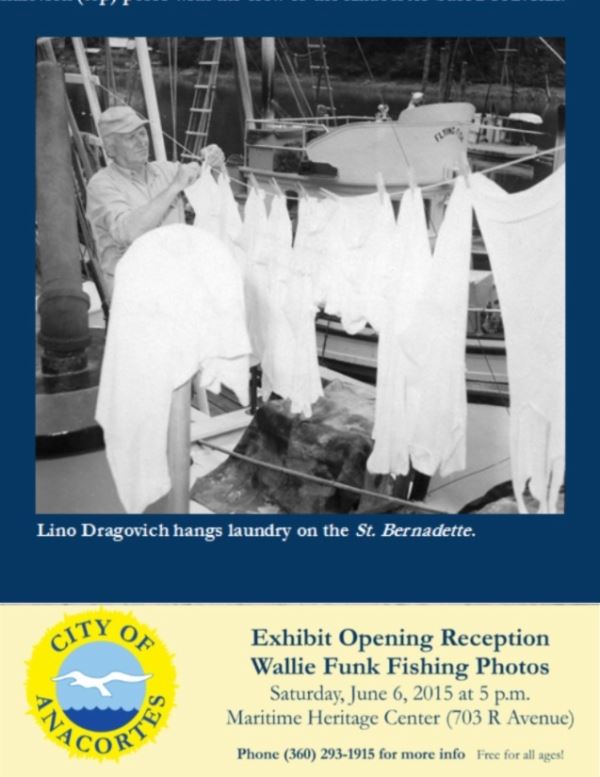 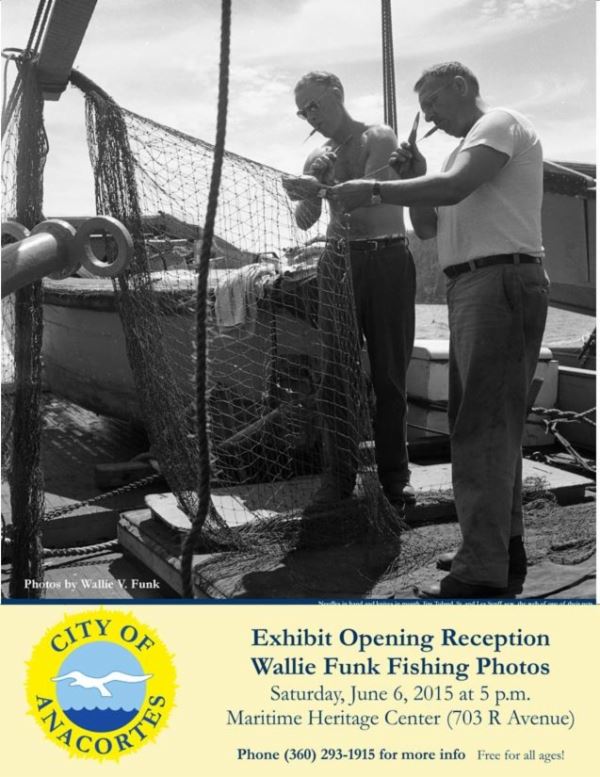 Funk Fishing Photos on exhibit at the Anacortes Maritime Heritage Center - Open Tuesday through Sunday, June through August to free.

“The story became a real-life experience when we had been routed out of bed at our 12th Street home by members of the crew, who came equipped with a duffel bag for a few travel essentials. ‘Don’t forget your camera, you might want to take a picture,’ someone shouted.” - Wallie Funk, Pictures of the Past

The Anacortes Maritime Heritage Center is shining a spotlight on Wallie Funk’s Fishing Photos, drawn from the Anacortes Museum’s new book by Funk, Pictures of the Past. Eight exhibit panels feature beautiful enlargements of Wallie’s images as he captures in detail a journey with the local commercial fishing fleet. Museum visitors are virtually able to join Wallie Funk on the Alaska-bound purse seiner Deception in 1958 as he documents an Anacortes rite of passage - a season on a salmon fishing boat. Wallie’s trip begins on a dare and continues as he catches some of the great photographs in Pictures of the Past:

“It was mid-June 1958 and a fleet of purse seiners was ready to cast off from the local port dock for summer fishing in Alaska. Friends and family members crowded the dock to take part in the annual farewell ritual to the crews which were departing with high hopes…it was an emotional scene, with the town’s Catholic priest there to bestow his blessing for a safe voyage and prosperous results.”

Before, during and after the fishing season there was always work to be done on the boat, skiff, net and other gear on a salmon purse seiner. On spring days the crews were busy at net sheds and docks at Cap Sante and along Guemes Channel.

Inside Passage to Alaska

“Ports of call along the breath-taking Inside Passage included Ketchikan, Warm Springs Bay, St. Petersburg and eventually the jump-off for our phase of the trip, Elfin Cove, the last stop before the Deception and others in the then-expanded fleet embarked on the often treacherous crossing of the Gulf of Alaska to Kodiak.” - Wallie V. Funk

While the Kodiak-bound fleet passed through Southeast Alaskan waters, Wallie documented some of the Anacortes boats that were already fishing. By 1958 the new Puretic Power Block had relieved part of the strain on backs and arms by pulling in the net hydraulically, which the crew then piled as it dropped from above.

While making money is and was the focus of commercial fishing in Alaska, doing so required three months of living with co-workers in tight quarters. Everyone played multiple roles in fishing, maintaining the boat and gear, cooking meals, cleaning and laundry - all toward a safe, profitable season.

“What is most memorable to us, as we recollect the trip, is the camaraderie that existed not only among crews of each vessel, but among those who were traveling the route together on other vessels. It was as if they all were their brothers’ keepers as the challenges en route to the fishing grounds required reliance on one another as well as respect for individuality.” - Wallie V. Funk 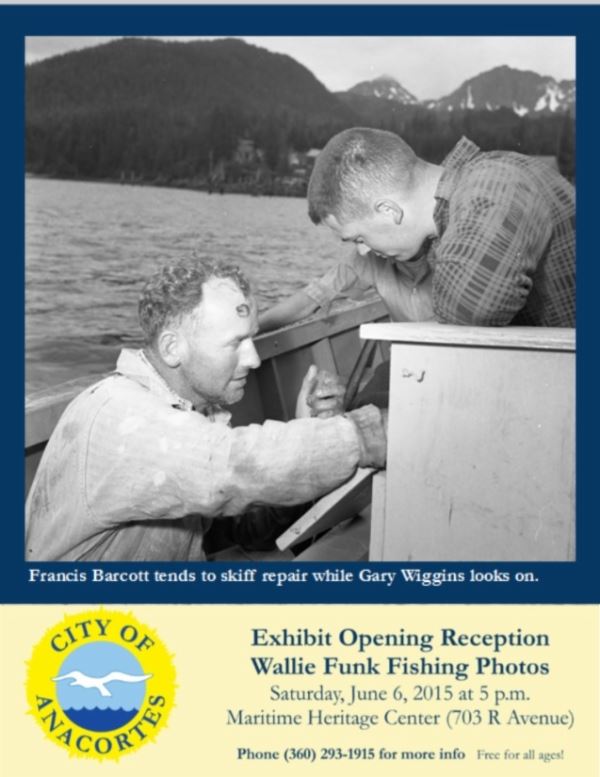 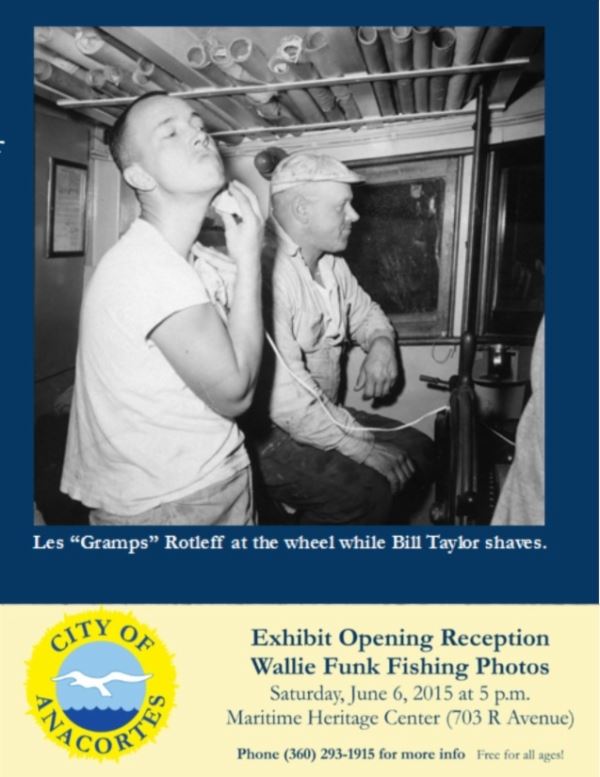 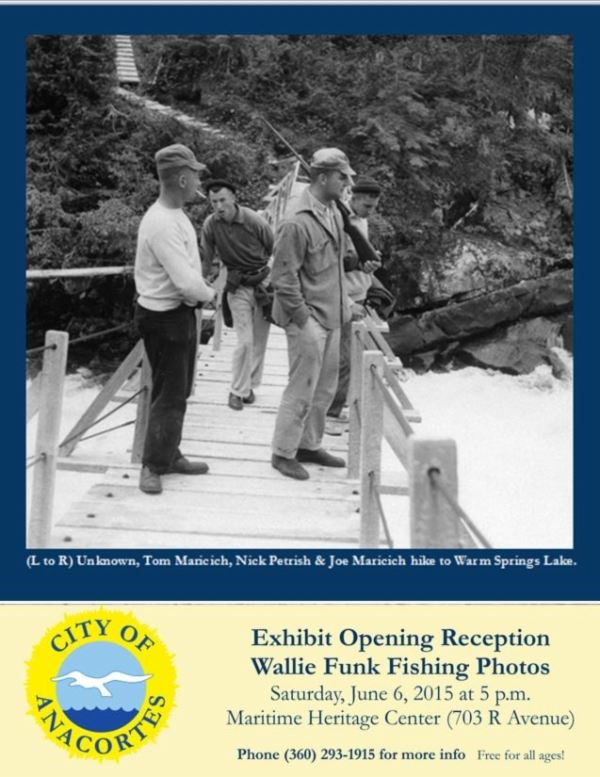 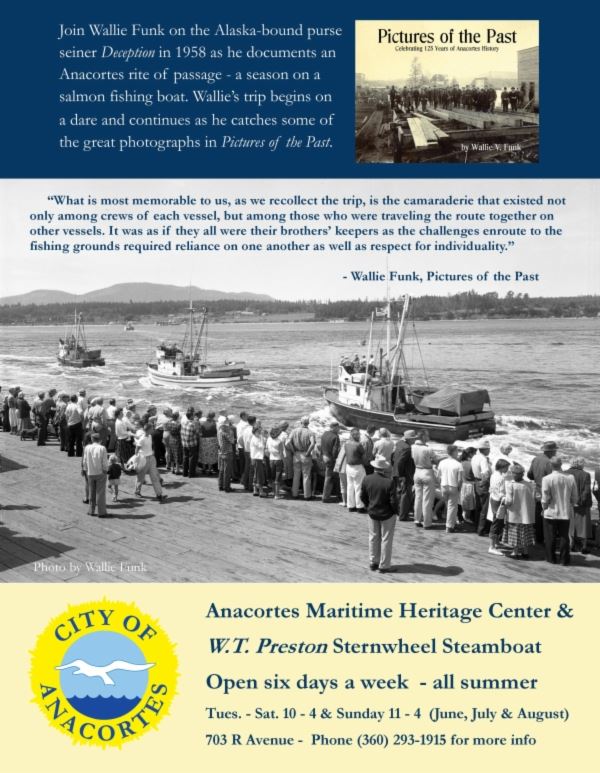